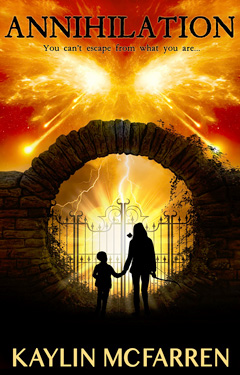 With the death of Lucifer, Queen Lucinda assumes control of Hell, ordering her soldiers to prepare for a doomsday war with Heaven. Craving eternal power, she devours the souls of gifted demonic beings, acquiring their abilities to destroy her perceived political enemies.

Meanwhile, the Black Crows meet with the Knights of Darkness in their hidden headquarters, plotting against Lucinda in their efforts to maintain peace and the balance of power. Consumed by hatred over Crighton Daemonium's unrequited love, Lucinda is unaware of the secret conspiracy brewing, or that Lucifer's spirit has returned to Hell inside the body of a soul–trapped demon.

Reclaiming his throne, Lucifer punishes his daughter for her act of treason. However, his obsession with Samara, Crighton's beautiful daughter, leaves him incapable of controlling his stolen body. After forcing her into submission, he names Samara the new Queen of Hell yet continues his authoritarian rule. When an insurgency breaks out on Earth, he becomes distracted long enough for her to be kidnapped by Nexus rebel forces, believing her to be the prophesied savior of their planet.

Is Samara the Phoenix, destined to destroy Lucifer? Or is she his soulmate and the true Queen of Hell?

The apocalypse was supposed to happen on October 21, 2011. American radio host Harold Camping had arrived at this prescribed date through a series of calculations that he claimed were based on Jewish feast days and the lunar calendar. In addition to his claims about the end of the world, he also predicted that on May 21, 2011, at precisely 6:00 p.m., God's elect people would be assumed into heaven, in an event he called the Rapture. Those who were not raptured, he said, would have to remain on Earth to wait for their doom five months later. According to media reports, some of his followers quit their jobs, sold their homes, and invested large amounts of money in publicizing Camping's predictions. When the Rapture did not occur, Camping re-evaluated his predictions saying that the event would take place simultaneously with the end of the world. After October 21, 2011, the self-proclaimed prophet stated that "nobody could know exactly when the time of the apocalypse would come."

Exactly. So, why do we continue to dwell on the end of time when we're enjoying the best years of our lives now? When the world stops spinning, hopefully not for at least 5,000 years, we can only pray that future generations appreciate the sacrifices made by past generations, and that the beauty that surrounds them continues to thrive. The creations and inventions that brilliant minds develop on a daily basis will someday surpass anything we've imagined possible. In my younger years, there were no cell phones, personal computers, or flat-screen televisions. Now, everything seems to be designed around comfort, flexibility, beauty, and affordability. However, while I'm living and breathing on this planet, poking fun at our "normal" existence and expectations by producing colorful, off–the–wall literature will remain to be my greatest pleasure.

Isn't it fun to believe that a demonic community, based on the normality of our human existence, resides in some weird twelfth–dimension universe, welcoming demons, and angels into their fold? This is why I write...simply to stretch the imagination and to thoroughly entertain.

Hell has a new ruler, Queen Lucinda. A thrilling venture into the depths of Hell offers unrelenting intrigue and fearsome characters, including timeless stories of love, friendship, sacrifice, and identity... plot twisting toward an epic battle.

- RECOMMENDED, The US Review of Books

Annihilation, the sequel to Kaylin McFarren's award-winning Soul Seeker, is a decidedly Shakespearean thriller. Amidst the supernatural world, the novel is essentially a classic story about love, betrayal and power between and among royal families. McFarren's blatantly "human" portrayal of Samara Daemonium's youthful obsessions set her up to be both victim, royal and a star in a wholly compelling coming-of-age story. To get this most out of Annihilation, readers are highly encouraged to read Soul Seeker first.

Get ready for the steaming, twisted plot of Kaylin McFarren's Book 2 in the Gehenna series—Annihilation—where nothing is as it seems, and enemies are closer than anyone may think. Recommended!

Simply couldn't put this book down, even when every hair on my neck was raised. It's that good!

Two regiments of ram-horned, cloven-hoofed demons marched through the blazing corridors of Hell in preparation for the Red War against Heaven. Their stomping feet and thumping spears shook dust loose in the solid rock tunnels leading to twenty massive cellblocks, each identified by their cardinal direction: north, south, east, and west. Confined in one of the cells on the lowest level was Hecate, the Woodland Goddess and Queen Lucinda's loyal friend. Within a month of assuming control of Hell, word had reached her that Lucinda's new regime was responsible for numerous beheadings, boiling demons to death, and implementing monstrous atrocities against woodland creatures and outspoken opponents within her own council.

Believing their friendship would make a difference, Hecate arranged a meeting with Lucinda two weeks earlier and pleaded with her to abstain from cruel acts against mankind. "Think of your legacy...the positive impact you could make." The briskness she put into her voice was belied by the unshed tears glistening in her eyes. She shifted her position in the high-back chair and drew a deep breath. "Lucifer was brutal throughout his rein...up until the day he died. You've always made brilliant choices, Samara. I know that better than anyone. Lucifer made the worst decision of his life by sending Crighton to England, and only the Sovereign Sector is responsible for the consequences that followed. I'm just grateful that Lucifer didn't survive after that nasty battle with his brother, Castiel. If he had, who knows what would have happened?"

The Queen rested her chin on her fisted hands. "Indeed. But you need to remember that my name is now Lucinda. I changed it after meeting with the Knights of Darkness and taking control of Hell."

"Yes, of course. I'll never forget the day before that happened. I was in the old arena when Crighton's mother stabbed your father repeatedly," Hecate said somberly. "I understand she was welcomed into Heaven along with her soulmate, though I don't understand why..." She let her voice trail off, shaking her head. "I guess we should thank them for your justly-deserved position."

"I already have...thanked Crighton, I mean. I offered him a more substantial token of my gratitude as well, but he turned it down."

"I was afraid to sit on the throne," she admitted. "That's why I waited so long to make changes. Tyrus helped Crighton escape from Hell, and Lilith played a large part in saving Ariel. But I was responsible for saving them all by agreeing to take my father's place."

"True enough, Lucinda." Hecate felt her eyes burn once more. She drew another deep breath before adding, "I'm sure your generosity will never be forgotten and will be celebrated for years to come."

"Since I managed to keep them alive, I suppose it's time for the three of us to assume our rightful responsibilities."

"That's right. Crighton, Tyrus and myself. We have a lot of unfinished business to resolve."

"Of course, Your Majesty." Hecate smiled at her, believing she was making progress.

"But first," Lucinda said, "I'd like to discuss your view on the way Tyrus' allies are likely to respond to our meeting. Especially with them opposing me at every turn. Then I'd like your personal impression on how the loyalists in my council will interpret your views on diplomacy in the woodlands. After that, there are a couple of treasury issues I promised to investigate. It's past time that my advisors and I established a tax structure and common currency. And now that we have the Imperial chambers remodeled and relaxed rules in place regarding horns, tails, and bat wings, we can start thinking about other things like enforcing appropriate punishment where it's due."

"Since you brought it up, don't you think it's a bit extreme...the way punishment is being handled? I thought you wanted to be a just ruler...the exact opposite of your father. If that's true, then why are you taking extreme measures with outcasts, human souls, and defenseless creatures? They would sing your praises if you allowed them to–"

"–run rampant and refuse to obey my laws?" Lucinda growled. She stood up with her eyes blazing red hot and her thin lips frowning. "So, that's why you're here. Not to support me but to oppose me like the rest of the ingrates in my kingdom. Leave and never come back here again! Your deception will not be forgiven or forgotten. Is that understood? I want you out of here...NOW!!" she screamed.